A few rumbles trickling off the engine precipitated a few millions more that reverberantly buttressed my wakeful existence, as we diverged from the asphalt for the upper regions. They all resounded and augmented a friend as is their natural employ, rising like springs of throbbing rhythms from the pendulous turbines and making for the sea of passengers. As dusk ebbed behind the half shuttered window, and the grounded life I had withdrawn from and abandoned in flight was pressing upon the sides of wistful remembrance, a sudden jarring in the bellies of my feet were convulsions induced by this emerging recollection. A memory which was barely the silhouette in a mist, brought a severe tingling of a phantom earth chopped off beneath me. In the lower window, altitudinal icicles mustachioed the wing face and the vestiges of twilight dimmed in the near and distant cloud bed. I abstained from the 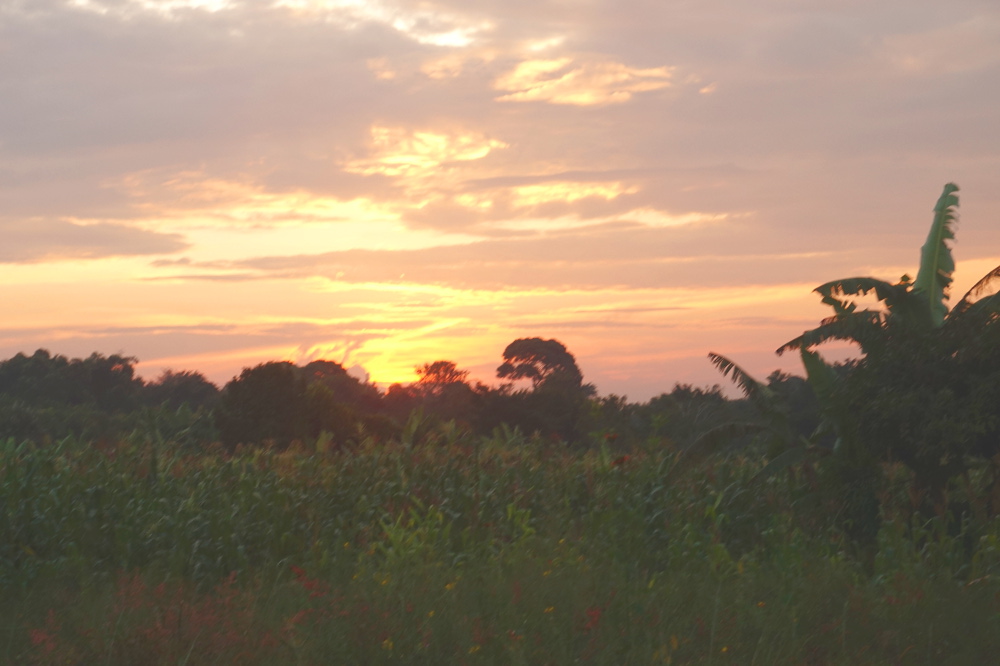 collective acquiescence of rumbling by occasionally dosing to an odd degree, dominated by the perplex and stranded feeling of being marooned on a facet of consciousness ordinarily darksome, in the rare treat of a lucid dream with my head nodding stupidly without to the Sandman’s puppetry. The absorbent gentlemen moored to my left, whose cargo of superfluous bodily tissues flopped over the quay and arm rest, was redolent of the world’s largest profiterole. Redolent in shape, in effect of guzzling too many and for being piped with cream. In the claustrophobic stomach of the plane, all moist and purplish and with undigested dessert, I couldn’t conceive of Africa coming any slower if she were galloping the globe in a great effort of escaping, and to tuck herself beneath the New World.

The easily irritable pilot – of an Italian hue – avenged some minor slight of the crew by mincing a few parrots and severing the continents tallest giraffe, Jim, on a hellish declivity from the frozen heights for the black stuff of Entebbe airport; touching down serenely on the strip like a tanker caressing the lonely seabed, with the sudden disappearance of the sea. I trundled into the vestibule for processing in possession of an iniquitous desire for a hearty probing, in a caravan of conspicuous arrivals – of a spectral glow are the deified whites – with a close feeling of individual juxtaposition heaping up, on our manifold paths into the early morning. The television dangling in the airport cafe couldn’t have illuminated the attention of three sideways passengers with an act of transmutation into a heaving and honey daubed maiden. And in avoidance of unsettling the comatose ambiance, I duly propped myself like a broom in the nearest nook. The prospect of Entebbe and its environing greenery seen thus propped unfurled through the brightening dawn in folds of tropical luxuriance, and seemingly from the hidden colours of a tepid morning ray appeared my host, Godfrey. A gentlemen whose convictions are evidenced in his footwork, economical and yet prodigal in his general sway and wavy gait, he beckoned a driver who with alacrity both proceeded upon our destination and inspired death in us by driving like a blind Mexican. 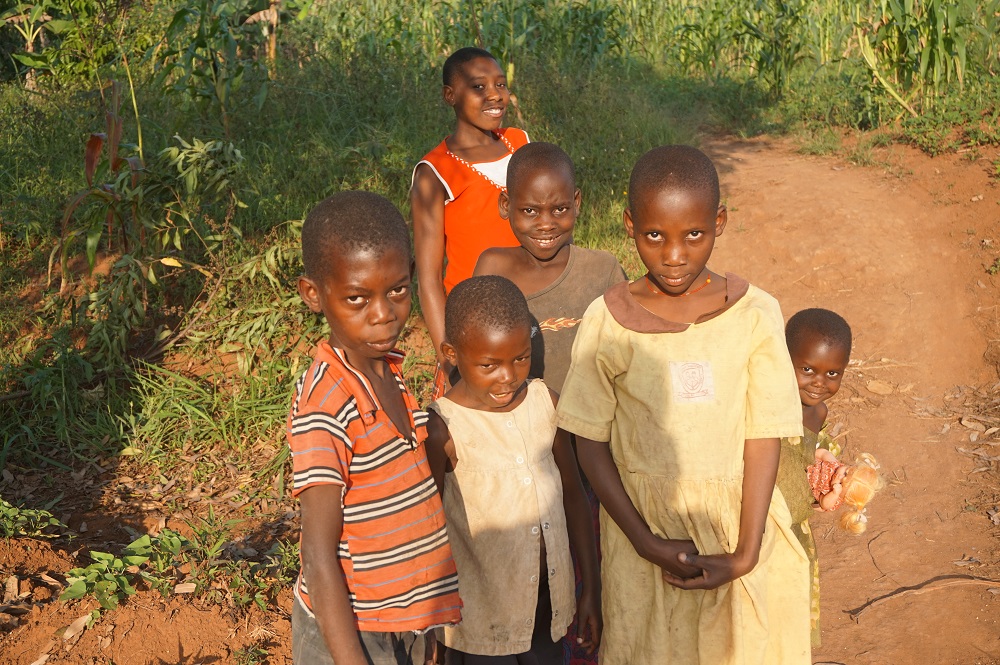 We rolled swiftly through the many towns and scatterings of houses each replicating the last in its activities, in its whiffs and opaque fumes and blaring sounds. Dawdlers – of the high unemployed percentage – thronged the wide dirt sidewalks which crumbled away from the desiccated asphalt into running pasture, meandering as they went with a mysterious foreknowledge of their surroundings and in absence of regard for their sight, looking this way and over there but forward and into their ominous futures. A miasma of commingled cooking smells thickened the air and I partook in the deepest of nasal inhalations through the slit of the speeding car window. Smells uniquely of Uganda traversing the minutiae of buds and receptors stuffed up my beak. The town of Kalisizo came upon us like a town in the night and presented itself admirably to my insatiable eyes, with colourfully painted and branded buildings, carpets of coffee beans dispersed to dry, countless goats tethered by hoof and horn to every half-sturdy object or inebriated person and children struck with wonderment to the very fabrics of their fragile hearts, throwing themselves beneath the wheels like martyrs to the snake pit. We breezed passed St. Maurice Rainbow Primary School determined on a bee line to Godfrey’s home and the warm hearth of his awaiting family. Little chuckling Jayden the sprout of the litter, Jason and Jacob the twins of abundant spirit, and Prossy and Winnie and Goreth the female adhesive which keeps the machinery humming and clinking. The feasts upon and tumbling from the table are feasts full of the gayest description not worthy of my attempt, such is the palette of hues, the aromas and the goats tethered to my ankles.

I embarked for Uganda in thoughts of change, assistance and idealistic unrealities. Wanting to affect in a humbly minimal way the existences of sponge-like children, lying effectively dead in the wake of Western civilization, without the guarantee of education or the opportunity of personal flourishing. I and other volunteers satisfy our days by imparting the idea of possibility beyond the confinements of poverty and its variegated distresses. That in their thoughts they may find direction to such a place of mind in which that possibility isn’t foreign and is alive to them. The pupils whose minds we have been filling like balloons, are some boarders and some attendees of St. Maurice Rainbow Primary School, so named for the variance of colour reflected in a child’s nature. Standing in the childrens eyes each morning with a stick of chalk playing between my fingers, I pronounce the days subject to a scent of burning lead, as the zealous children furiously copy down every curl and curiosity of my spidery blackboard scribbling. 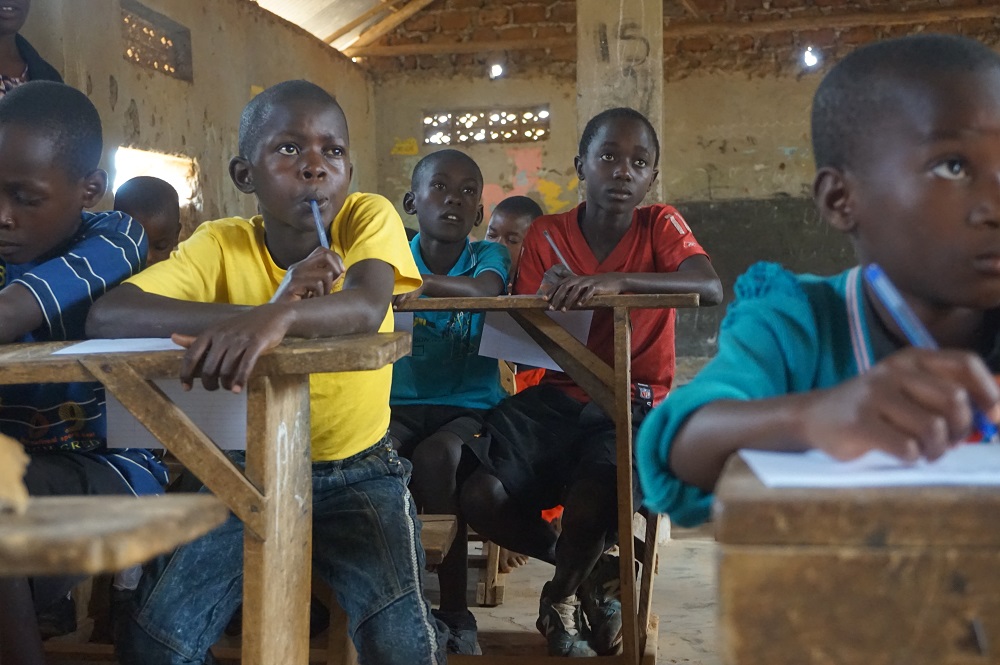 There exists in Ugandan children a voracious appetite for education. Roger, Passy, Dorothy, Benjamin and Reticia, to name but an inadequate selection of the many children whose hands pierce the air above their heads in sonic response to a question, are the hardest of hard workers. A uniform expression of serious concentration captures their little faces when I start the lessons and doesn’t subside until the coming distraction of break time, when even a rap on the staff room door yields a question of singularly childish strangeness ‘What is the name of the fat fish that grows?’ Puffer fish being as common to Uganda as baboons to the Arctic. One such question a week, though there are numberless questions in any morning, renders the teaching experience with an extremity of joy. And if all I have contributed to Uganda in my time is the ability to identify a swollen fish, I have nonetheless increased the total amount of knowledge positively affecting the countries course.

In the shell of a nut or some such equivalent device, therein lies the essence of a volunteering experience in Uganda or in a needy place more broadly. It is a small contribution by one to the benefit of many which provides the giver with a briefly elevated purpose and the receiver with a sense of potential.

One thought on “Uganda’s Curious Children”